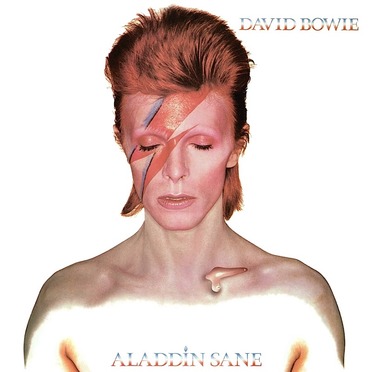 Aladdin Sane, following the überplanned and calculated Ziggy Stardust, came off as a far stranger recording. None of the high-concept drama and campiness of the former record is revisited in kind. Instead, tougher rock songs such as "Panic In Detroit“, "Watch That Man“, and "The Jean Genie“, as well as a wonderfully and raucously covered "Let's Spend The Night Together“, are contrasted with jarring, nearly serial dissonance on "Cracked Actor“, the title track, and "Lady Grinning Soul“. Here, science fiction à la Phillip K. Dick, freakish lounge-jazz, and cinematic incidental music vie for space in Bowie's articulation. All of it is compressed into a particular glam rock aesthetic that made attempts to conserve a bent, if present, innocence (check "Drive-In Saturday for clues with the doo wop choruses). The result feels like rock & roll fragmentation, ahead of its time. Aladdin Sane might have sounded immediately comfortable alongside the Fall's Live at the Witch Trials or the Teardrop Explodes' Kilimanjaro album, not to mention portions of Joy Division's Unknown Pleasures from a few years later. All of that said, as an album it actually has aged better than Ziggy because the listener can never be completely familiar with its shape-shifting elemental constructs and medication-inducing mood swings. As for the bonus material here, it is nothing short of fabulous. Disc two is chock-full: two versions of "The Jean Genie" (including the single mix), the single edit of "Time“, two versions of "John, I'm Only Dancing“, the previously unreleased "Life on Mars?," the original studio recording of "All the Young Dudes“, a different, unreleased version of "Drive-In Saturday“, and live versions of "Changes" and "Superman“.

A gloriously trashy romp that closed the curtain on Bowie’s glam rock period, the underrated Aladdin Sane was Bowie’s last major album with Ronson, whose edgy guitar playing played a prominent role in making Bowie’s glam era so great. Fortunately, Mick didn’t go quietly into the night, as his raging guitar runs highlight the rollicking Stonesy rocker “Watch That Man”, the manic, rhythmic, riff-driven hard rock of “Panic In Detroit”, the high-octane grunger “Cracked Actor”, and the stomping funk of “The Jean Genie”, the album’s lone hit single. Also memorable is the subdued melodicism of the title track, which featured sparkling piano work by new recruit Mike Garson, whose jazzy, experimental playing also dominates the lush, lovely “Lady Grinning Soul”. Elsewhere, “Drive In Saturday” and “The Prettiest Star” both add dashes of '50s doo-wop and sax to soulful, catchy, and campy mid-tempo melodies, while the cabaret-influenced “Time” (on which Garson also stars) is the album’s big (some would say overwrought) ballad, with one of Bowie's best vocals ever, as well as excellent backing vocals, which are skillfully employed throughout the album. And Bowie had so much fun supping up the Stones’ “Let’s Spend The Night Together” with glam guitar, futuristic synths, and boogie piano that he then decided to do a whole album's worth of cover tunes called Pin Ups (à la Bryan Ferry’s These Foolish Things). Aladdin Sane was written during “Ziggy’s” zany U.S. tour and though it lacked the conceptual unity and epic sense of grandeur of Ziggy, it nevertheless was a filler-free, hard-hitting platter primarily comprised of excellent songs. It may be overshadowed by Ziggy and to a lesser extent Hunky Dory, but Aladdin Sane was another great album, one of Bowie’s very best in fact.
Rating: A