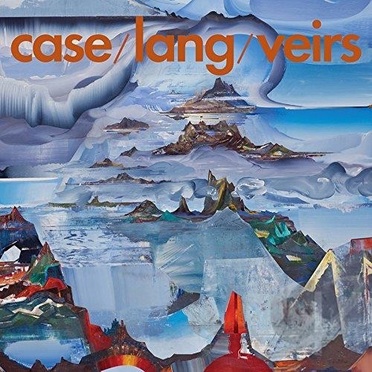 When artists of note collaborate on a project, the greatest obstacle is usually balance. The participants may truly respect one another, but as talent, ego, and personality enter the picture, someone is inevitably going to dominate the proceedings, and someone else will end up in the shadows. Neko Case, k.d. lang, and Laura Veirs seem keenly aware of this on the album case/lang/veirs, an album of songs the three singers and songwriters wrote and recorded between 2013 and 2015. And these songs often suggest a conscious effort to make sure everyone gets her share of the spotlight and that everyone's strengths are put to good use. Oddly enough, one of the consequences of this is that k.d. lang, the strongest vocalist here, doesn't get as much time at center stage as one might expect, and ultimately she makes less of an impression than her partners. One could argue that lang potentially has the most to lose in this project; while Case and Veirs have healthy followings, lang is the genuine star here, but she hasn't made an album that's been as celebrated as her reputation in some time. While this project could have given lang a chance to step out of her comfort zone and try something new, here she's content to stick to atmospheric midtempo numbers that fit her skill set beautifully, but offer little in the way of surprises (beyond the irritating fake woodwinds on "1000 Miles Away"). However, Case and Veirs give her a chance to sing harmonies with vocalists who approach her own level of skill for a change, an opportunity she seems to relish, and here Case sounds most like the album's MVP. Case's cool, introspective indie rock approach dominates the album's melodies and production, her lead vocals are both naturalistic and dramatically effective, and she harmonizes beautifully with lang and Veirs. And Veirs ends up shining unexpectedly bright on case/lang/veirs; the sweet, homey modesty of her vocal approach is a pleasing complement to the more dramatic stylings of Case and lang, and she contributes a gorgeous uptempo pop tune to the set, "Best Kept Secret," as well as an affecting homage to Judee Sill. As much as case/lang/veirs strives to be an album that brings together three truly important artists, what it does best is broker a worthy compromise between their individual gifts and musical identities. While case/lang/veirs doesn't approach the greatness these women have managed on their own albums, it does offer more than a few beautiful moments they could not have achieved on their own. The result is a fascinating, rewarding experiment that deserves to be repeated. ~ Mark Deming